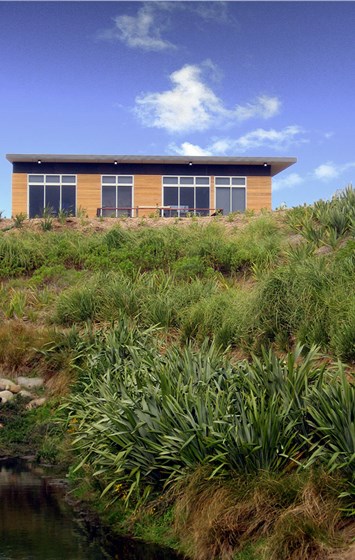 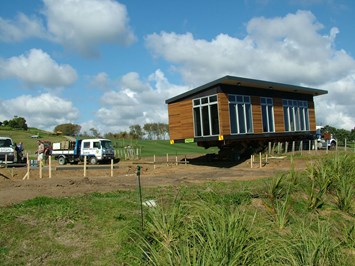 A contemporary version of the ‘light touch on the land’ of the traditional modest New Zealand bach, the K Bach was created as a structure that could be entirely prefabricated in the builder’s existing factory and then simply trucked to site.

Designed in collaboration with Koastline Houses, the bach has a simple modular form. Its box shape and timber sheathing both take their cue from the traditional low-key weatherboard bach, meaning that the K Bach sits humbly in its surroundings, a relaxed and unpretentious holiday home ready for sand to be trekked inside and jandals to be left by the door. Glazed doors and full height windows on the front face can be opened up to the outdoors in summer.

The K Bach attaches to a series of simple circular concrete foundation pads. Once these have been prepared on site, the bach can be installed in less than a day and requires little further work before it is fully complete. Module options allow the structure to be customised to suit. It is rigorously constructed to withstand the brisk winds and salt air of the Taranaki coastline but can also be positioned with minimum fuss anywhere in New Zealand, from the coast to the mountains.