Wellington is poised to become home to the leaning tower of Rongotai. Airways New Zealand has lodged a resource consent application with Wellington City Council for a 32-metre-high airport control tower, designed to lean into the prevailing northerly wind at an angle of 12.5 degrees.

That would be considerably more than Italy's Leaning Tower of Pisa, which leans by about 4 degrees. Even before 1990, when remedial work was done to correct its lean, it was at an angle of only 10 degrees.

The nine-storey Rongotai tower is proposed for an industrial area at the southern end of Tirangi Rd, on airport land near Lyall Bay. It would give Wellington Airport's 20 air traffic controllers 360-degree views from the lookout area on the top floor.

Airways chief operating officer Pauline Lamb described the tower, which would cost $18 million, as being in keeping with the local environment.

"This tower combines a super-strong and safe structure with excellent functionality and stunning urban design," she said. "We wanted something which is a little bit quirky, which reflects Wellington's progressive image.

"Our controllers will have an excellent view of the airfield from this new site, which is positioned to maximise efficient operations now and into the future. We're looking forward to getting it built, and up and running."

Architect Evzen Novak, of Studio Pacific Architecture, said plans involved solid base isolation foundation features, which would ensure the building was secure in an earthquake and a southerly.

If the resource consent process went smoothly, Lamb expected construction to begin in November, and it could be operational by December next year.

Wellington Mayor Celia Wade-Brown said council planners had advised her the application would probably be publicly notified, particularly given its size and design.

The new building, to replace the 58-year-old control tower in a housing area at the northern end of Tirangi Rd, was essential infrastructure, she said, but "it's good that the community will have its say".

Airways expects to award construction of the building to Hawkins Construction.

The plans call for a secure fence to be built around its base. 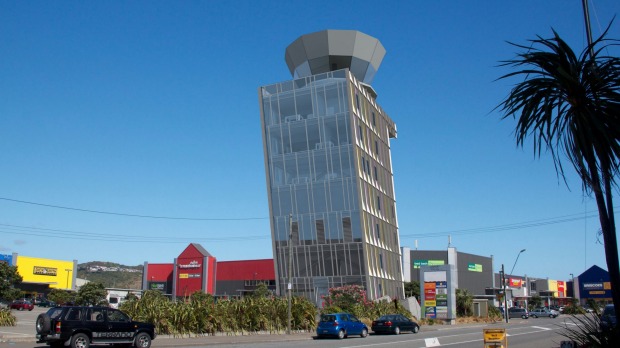 View of how Wellington Airport’s new 32-metre-high control tower would stand among its neighbours in Tirangi Rd, Rongotai

We wanted something which is a little bit quirky, which reflects Wellington's progressive image.