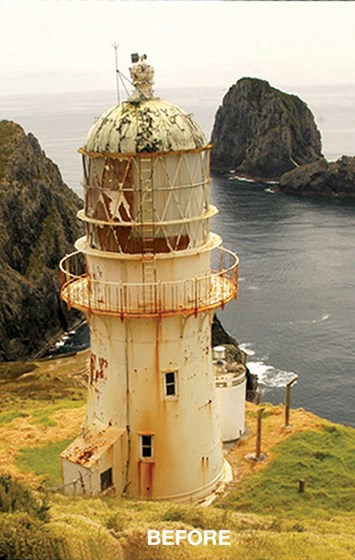 An unusual but thoroughly enjoyable project for the Studio, the restoration of the 1906 Cape Brett lighthouse was completed in 2007. The heritage registered cast iron lighthouse was originally built by Judd Foundry in Thames and was decommissioned by the Maritime Safety Association in 1978; it was retained as an historic building and is now maintained by the Department of Conservation.

Externally the lighthouse required substantial refurbishment, with 60 layers of dilapidated paintwork beginning to expose the cast iron to corrosion.

Studio Pacific undertook an extensive heritage report on the building in 2005, and in 2007 work was begun by stripping back the old shell and completely repainting it with a new, highly protective paint system from Resene.

The new exterior is finished in crisp white, offset by the muted bronze of the original copper dome, which has been cleaned and restored. Original heritage detail, such as the balcony balustrading, the access ladder and glazing to the astragal windows, was replaced or recreated where necessary.

An important part of New Zealand’s maritime history, the Cape Brett lighthouse is now resplendent on the hillside once more, ready for another century. It is available for visiting by appointment with DOC in Kerikeri; more information can be found on the DOC website.